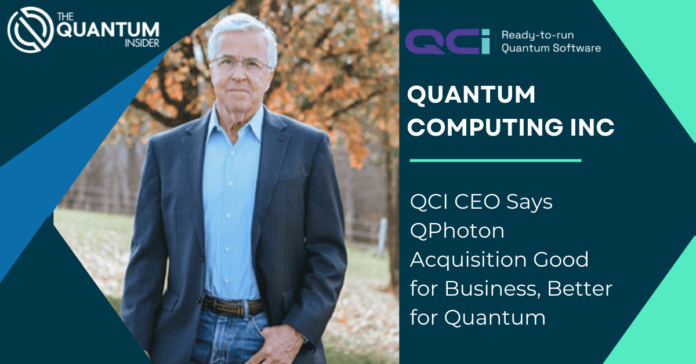 It’s usually pure business concerns that drive acquisitions. According to Robert Liscouski, president, CEO and chairman of QCI, the acquisition of QPhoton was driven by more than just the bottom line of how the purchase would create a unique, full-stack quantum company. Liscouski said the ultimate decision to acquire the advanced photonic quantum technology company was propelled by both teams’ perfect alignment on the idea that quantum computing can only achieve its full potential if the technology is evenly distributed across the user base and the belief that the combined companies could play a key role in achieving that goal of quantum democratization.

QCI’s main efforts have been to develop a platform that would be agnostic to the proliferation of quantum processors now entering the market.

“What we developed is a platform to do the heavy lifting, to do all the connections into various QPUs to do all the work that ordinarily a quantum programmer would have to do and then shorten that lifecycle that that that solutions lifecycle, by orders of magnitude – in some cases, it can take months or even years – to be able to allow a user to actually formulate a problem that can run on a QPU and solve it, immediately,” said Liscouski.

According to Liscouski, QCI’s agnostic approach to quantum hardware – as seen in its Qatalyst  software — meant that the team wasn’t necessarily looking to acquire a nascent quantum hardware firm, such as QPhoton. In fact, QPhoton found QCI — and, the early discussions revealed that the matchup between both teams’ philosophical, technical and business goals just made too much sense not to pursue an acquisition.

“I think the fact that we have a presence in the marketplace and that we really are very business-focused, attracted them to us, because that’s precisely what their goal is, as well,” said Liscouski.

QPhoton, led by Yuping Huang, CEO of QPhoton, the Gallagher Associate Professor of Physics and director of the Center for Quantum Science and Engineering at the Stevens Institute of Technology, has developed advanced photonic quantum technologies. Huang’s quantum research has produced a number of advances over the past two decades with the support from DARPA, NSF, NASA and DoD, among other funding agencies.

“QPhoton has developed a fairly diverse set of quantum-based technologies, everything quantum LiDAR, quantum networking and they are even developing a photonic-based QPU,” said Liscouski. “And that’s an attraction for us because of the scale that it offers and the problems that it can solve. It allows us to further and build on our own philosophy of bringing these quantum-based solutions to end users since it’s essentially ready-to-run at a significantly lower TCO-Q.”

Liscouski said the acquisition has the potential for both immediate and long-term benefits. He added that QPhoton has products in its pipeline that can go to market in the near-term – and other products in development with long-term, but far-reaching impact.

“The goal for tomorrow is to really be able to leverage the technologies that Yuping has developed, which we believe are eminently high-value,” said Liscouski.

QPhoton’s technologies include devices for quantum networking and quantum LiDAR. The LiDAR system could be aimed at autonomous vehicles.

“We are working on optimization problems could be used to tackle the types of problems that need to be addressed in autonomous driver systems, but most of that was about sensor placement,” said Liscouski. “But, here, we’re talking about a better way to actually do the sensing, something that can provide even more fidelity around the imaging that can be processed. So, you have this combination of better sensor placement and better technology at the same time. They complement each other extremely well.”

This would be the ultimate goal of the two companies because building a less expensive, easier-to-use quantum computer is the heart of what is driving both companies: democratizing quantum.

“This would be another way of bringing more accessibility and furthering the democratization of quantum computing, so again, it’s a perfect alignment between the two businesses and complementary at the same time,” said Liscouski.

As a quantum software developer and quantum platform provider, QCI considers itself hardware agnostic. QCI’s Qatalyst software was built specifically to support a variety of quantum technologies and QPUs, something the company believes is absolutely necessary in this emerging quantum market.

This big-tent approach means they partner with parties across the ecosystem and will integrate with products that make sense for their end users, or, as Liscouski says, “We will partner with everyone.”

Still, Liscouski is intrigued by the photonic approach and impressed by its potential performance. It is an elegant and simple solution for quantum, he said.

“There is a simple elegance to the photonics approach – although I don’t want to suggest that it’s simplistic,” said Liscouski. “And the notion that photonics could work at room temperature makes it a rather elegant solution, an elegance that could be a big benefit to us in the industry.”

QCI expects other advantages to emerge as the product moves from prototype to production. The company envisions a system built with QPhoton’s technology that is much different from current devices on the market with the ability to serve as a processor or pre-processor.

There’s more than just the shared philosophy of democratizing quantum and the commitment to build products that take the world into the quantum era. Both teams seem to be excited about the good that this quantum era will offer society.

For Liscouski, who has a national security background, quantum computing’s potential to safeguard and optimize supply chains is worth the effort.

“I think there’s some really important work that can be done in the community, in general, and the areas that we think that we can lend ourselves well to, especially, in these early stages,” said Liscouski. “Probably one good example of a use case is the supply chain and logistics. We talk about supply chain logistics in terms of managing different types of inventories or making sure that the routes can be handled. But, my national security background lends me to looking at things a lot deeper than just the superficial, ‘How do you get from point A to point B?’ When we talk about supply chain, we are talking about all interdependencies in the supply chain and analyzing all the critical elements that’s necessary to make sure that this is going to happen. For example, in chip manufacturing, supply chain also gets into; What goes into that chip? Who owns that supply chain? What are the vulnerabilities? How can you best optimize? I think quantum computing applied to supply chain will have tremendous benefits socially, as well as technologically and commercially.”

One area Liscouski is particularly focused on from his days at the Department of Homeland Security is risk analysis and management.  He stated that using quantum computing to improve risk management will have significant impact on the ability to model complex risks such as cyber and infrastructure risk. There is also great opportunity to use this capability in better understanding health care risks to provide superior outcomes for patients.  Though there may be difficulty in predicting when quantum computing will provide true computational advantage, there is no doubt that quantum computing will eventually have a positive impact on all aspects of business and social processes.

You can read more at QCI website and more about the acquisition of QPhoton here.