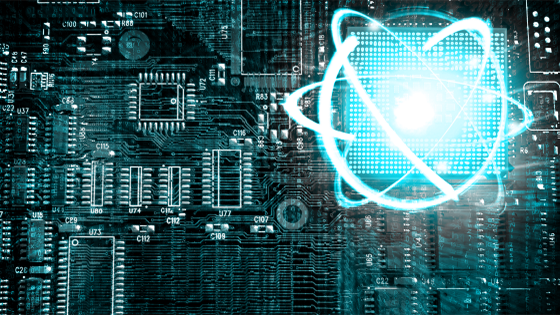 That seems to be a popular question in some arenas. The problem is, it’s not really a feasible scenario, so the true answer is never. Not that you’ll most likely hear a quantum vendor saying that. After all, to sell new computing architectures you need people to believe they will replace whatever older architecture is in the mainstream.

For example, think back to when Graphics Processing Units (GPUs) were introduced to augment classical systems to speed up computation associated with synthesized graphics generation (vector computation of the 3D scene, shading, texturizing, etc). GPUs didn’t replace classical computers, they enhanced their abilities for the onslaught of gaming, High Performance Computing simulations and more. Sure, there are GPU-heavy systems, but they each need a Central Processing Unit (CPU) to manage processes and the system itself.

The same is true for quantum computers with their Quantum Processing Units (QPUs.) QPUs will serve to augment or enhance classical computers with CPUs for the foreseeable future. Yes, some small experimental problems and simulations can be run on QPUs today. That’s not the same as replacing classical computing.

There are many thoughts and scenarios about “hybrid” or enhancement across different use cases. Here’s one example focused on optimization.

Quantum computers simulate real world scenarios in ways that classical computers simply cannot. Their 3-dimensional processing enables complex analysis of multi-dimensional problems thanks to capabilities like superposition and entanglement. These features allow them to investigate what happens in complex situations as different elements change, simulating all related changes in the scenario. They are especially accurate at identifying “where” the best answers are most likely to be within vast data sets, based on the problem you’re trying to solve. They’re more accurate than classical systems, and they find all results that meet the problem criteria, offering a diversity of results that provide better insights for the business or organization.

Classical computers do well at searching the data itself to find the best answer to the problem. The challenge is that they have to work through volumes and volumes of data in a serial fashion, reviewing large amounts of data that often has no relevance to the problem. This is why we hear about problems that run forever and never find a solution.

When you combine a quantum computer with a classical computer, the QPU can help locate the most likely positions in the data to find the best answers. The classical computer can then be directed to search for the very best solution or for a diversity of results in those prime data locations.

The results are accelerated performance, more accurate results and a diversity of results to choose from. In contrast to the potential to never solve the problem, less accuracy and a single result with classical systems.

It’s most likely that quantum computers in a pure quantum environment will process new, complex simulations and scenarios that we cannot process at all using classical computers today. They’ll open new doors to new solutions we simply can’t imagine today.

That’s why Machine Learning and Artificial Intelligence are areas that are often mentioned with quantum computing. These need many of the aspects of a quantum computer.

Complex and vast simulations also fall into the potential for “pure quantum.”  Fundamental to their nature is quantum computers’ ability to examine a vast number of possible combinations or states very quickly. The first problems to be routinely solved faster entirely on a quantum computer, rather than on a classical computer, may come from many different fields but will almost certainly all exploit this characteristic of quantum computers.

These problems come from different industries but they all have in common the fact that finding the best solution is impractical with a classical computer because there are so many possible solutions to examine. Since a quantum computer examines many different possibilities simultaneously, problems that will never be practical on a classical computer will become practical on quantum computers.

Each has its own strengths and use cases today. As we expand our quantum knowledge in the future, we’ll find more ways to use quantum with classical, and on its own.

All the hype about quantum computers often misleads people into believing that they are ready for production and will take over the world. That’s not the case. As with any new technology, they need time and vendor effort to evolve to become production-ready. Similarly, they have a specific arena of useful applications, an arena that includes many unsolvable problems and unknown potentials today.

Classical computers will continue to be the workhorses they are today. At least in the foreseeable future.